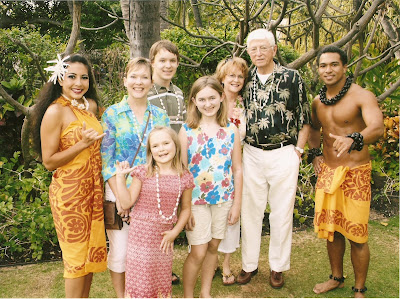 This week we attended our first luau! We went to the luau at the Hale Koa hotel. 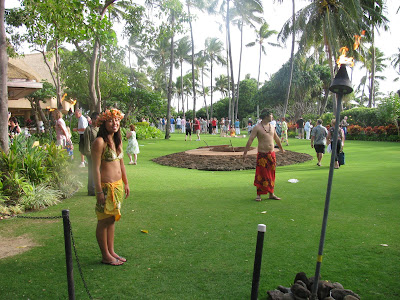 The grounds were just incredible. There were men playing soft Hawaiian music, the plants and flowers were glorious. There were people in native costumes making headbands out of palm fronds, chopping up fresh coconut for us to taste, handing out flowers for us to put behind our ears and handing out seashell leis to each guest. It was very relaxed and peaceful. 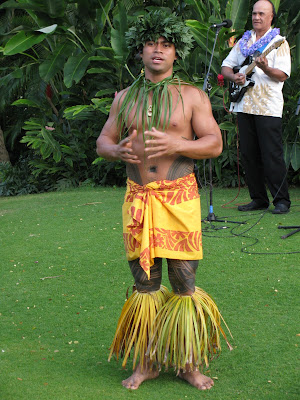 This was a Samoan man who kept us entertained during the cocktail hour. He was very funny! Check out those tattoos. He said the tattoos were part of a rite of passage that he had to go through. He said it took fourteen days to complete the tattoo and, yes, it hurt. And yes, everything was tattooed. 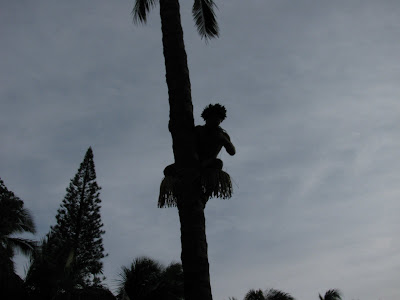 He demonstrated how to climb a coconut tree using only a bandanna around his feet. 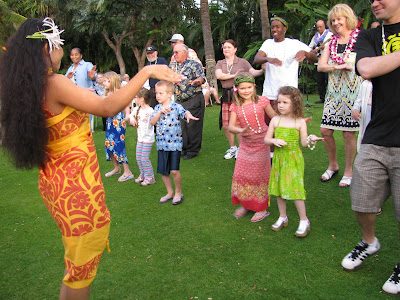 They picked people out of the audience and gave them a quick hula lesson. Katie was thrilled to be one of the people chosen and of course it irritated Ben because he thinks Katie is such a show-off. 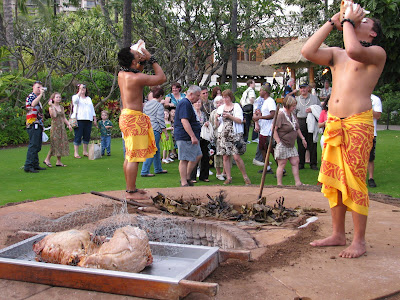 They dug a pig out of the pit using an ancient Hawaiian tool called a "shovel" and then called us to dinner by blowing through conch shells. 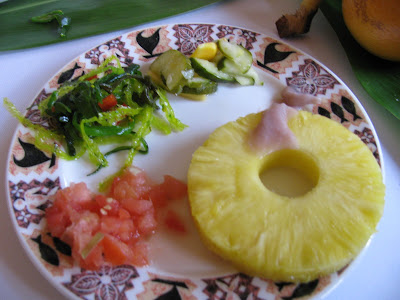 When we sat down at the table our appetizers included lomi-lomi (raw salmon, tomatoes and onions), seaweed, pickled vegetables, and poi (that's the purple stuff on the pineapple slice there. Despite what it sounds like, everything was delicious; except the poi which is not awful, but just sort of tasteless.

Emily took one look at the appetizers and burst into tears.


I assured her that she didn't have to try anything she didn't want to and that there was regular food on the way which she would enjoy. But of course she was in a full blown pre-teen hormonal snit and her life was apparently ruined. She loves fresh pineapple, apples, oranges, and bananas all of which were on the table also, but she refused to touch any of it and kept snarling, "I'm just not hungry!"

(Note to future hormonal pre-teens: nothing ruins a good snit like finding something you actually enjoy, so in order to retain that "my life is horrible" attitude you have to refuse things that you normally like.) 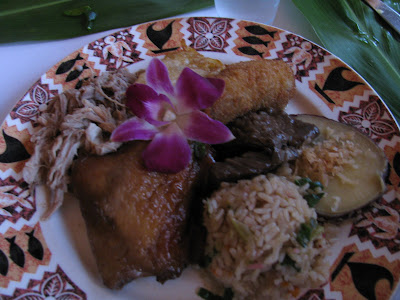 The food was fabulous and plentiful. We each had fish, pork, beef, chicken, rice, and potato. The flower may have been edible but I just set it to the side.

Miss "I'm just not hungry" ate everything on her plate and the leftovers on everyone else's plates and then griped about how she couldn't see what was happening on the stage because the lady in front of her kept moving her head.


Dessert was a slice of coconut cake and a pink pudding/jello square. Emily ate the cake after scraping the coconut off and then stabbed her jello thirty or forty times with a fork. 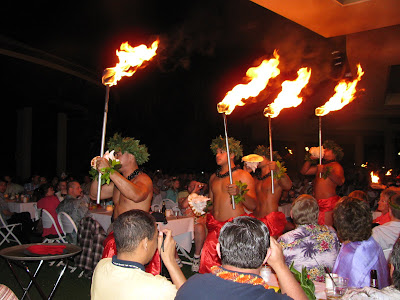 I've never been to a luau before so I was expecting lots of slow soft music and gentle hula. Which is nice, but a little too calm after a while. I was very impressed to find that the show involved humor, many different style of dance, lots of costume changes, energetic music and FIRE. 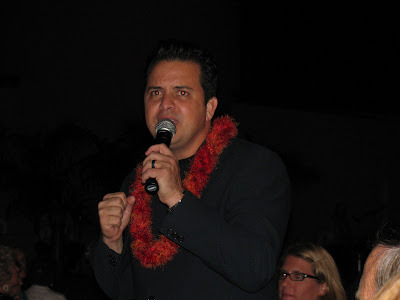 And our host was Glen Medeiros! Remember him? He was a teen star in the 80's with the song "Nothing's Gonna Change My Love For You". He is a Hawaiian native who now teaches high school history and sings at the Hale Koa. I can remember watching him on VH1. 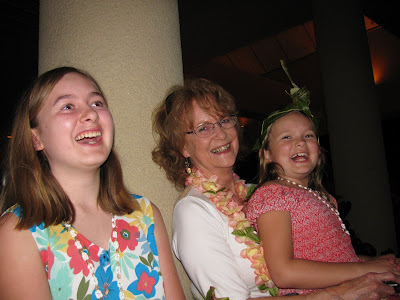 Even Emily managed to have a good a time, and that's really saying something!

Popular posts from this blog

May 04, 2009
Ben went camping with his youth group this weekend. He said it was the best weekend he's had since we've been in Hawaii, and possibly in his entire life. The one negative part was that he stepped on some coral out in the water and cut his feet up pretty good. He swears it was all dead coral - you shouldn't touch live coral, much less walk on it because it damages the coral. No one ever mentions that it also damages your feet. They just tell you not to damage the coral. Also, coral is a living organism . If you step on live coral and a tiny piece breaks off in the cut, it will continue to grow. Did you see the movie Alien ? If some creature incubates in Ben's feet, then breaks out and eats us all one night, I'm going to be quite miffed. (Make sure you read the inscription on his tee shirt in this picture. It's quite appropriate.)
Post a Comment
Read more

November 30, 2010
Katie and I were putting a puzzle together yesterday. Each time I would pick up a piece and start to put it where I thought it should go, she would pluck it out of my hand and put it in the right spot herself. I pointed out to her that she was doing this and she apologized. I jokingly told her, "If you do that one more time, I'm going to snatch you bald-headed." She looked at me in complete bafflement and said, "Snatch you bald headed? What does that mean?" "It means we'll have a kicking, screaming girl-fight where we roll around on the floor and I pull all your hair out." She grinned and laughed. Then every so often for the rest of the time we were working on the puzzle, she would randomly chuckle and say to herself, "Snatch you bald headed." It's amazing how a common insult when I was growing up is now a quaint amusement to a ten year old. I could tell she was filing that one away to pull out and use later. It made me th
3 comments
Read more

September 30, 2008
I'm having my annual mammogram today. I always hear about how painful they are, but honestly, I've never thought they are that bad. Not the most comfortable, but not painful either. Every time I have a mammogram, I'm reminded of this story. It won the Erma Bombeck Writing Competition and I still get a kick out of it every time I read it. So I'm posting it here today for your reading pleasure: Erma Bombeck Writing Competition 1st place in Humor Category Winner Leigh Anne Jasheway of Eugene, Oregon "The First Time's Always the Worst" The first mammogram is the worst. Especially when the machine catches on fire. That's what happened to me. The technician, Gail, positioned me exactly as she wanted me (think a really complicated game of Twister - right hand on the blue, left shoulder on the yellow, right breast as far away as humanly possible from the rest of your body). Then she clamped the machine down so tight, I think my breast actually turne
1 comment
Read more

Aloha Ya'll!
I'm a former homeschooling mother of three, married to my hero for 29 years. All of my kiddos have graduated and I've gone back to the working world. My husband has retired from the military and is now a working civilian.